If you like grilled cheese and live in or near Bossier City, Louisiana, you are in luck. TOM+CHEE had their grand opening today. Oh, and they have so much more than just grilled cheese. Grilled Cheese Donuts? Yes, that’s a thing. 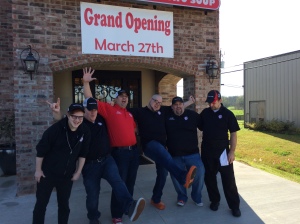 You may have heard about their awesome story and followed their success on the ABC TV Show “Shark Tank”, or one of several other tv shows that have featured them. In the event you haven’t heard about TOM+CHEE, let me fill you in a bit. Trew Quackenbush is the founder and master cheese mind behind it all. Corey Ward is the marketing guru that creates the fun atmosphere. Together they have made a dream come true. What started as a food tent in a Cincinnati public square ice skating rink, has now become a cheese empire. Trew began working at 15 in a family burger joint and had a dream of one day owning his own restaurant. At a backyard barbecue, Corey and Trew made plans to get the cheese grilled. Starting with $2400, the company is now a multi-million dollar franchised phenomenon.

I had a few moments to speak to Trew at the grand opening of the Bossier City store. It’s super amazing to see this guy, who is probably worth millions, interacting with his newest franchised team. He is down-to-earth, approachable and seems to have a fun spirit. It made me so excited to know that there really are people who care behind franchises. Chris Currie and Josh Woodard are the franchisee owners of the Bossier City restaurant. As the “Marketing Maven” for Holiday Lanes, I enjoyed see their polo uniform shirts embroidered with their titles. Josh – “The Head Cheese” and Christ – “The Jedi Master”. What fun!

Make sure you follow TOM+CHEE on their local social media sites: 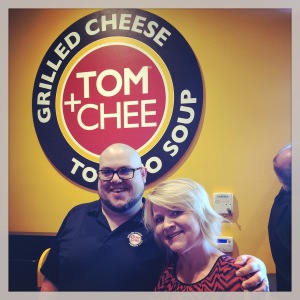 Interested in more about TOM+CHEE? Here are a few links:

I'd love to hear from you, please leave a comment Cancel reply

This site uses Akismet to reduce spam. Learn how your comment data is processed.